An Evening in Nerd Heaven! 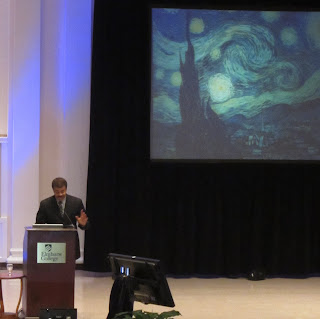 Last night I was in nerd heaven, or as my husband called in, "Nerdvana." We went to Dr. Neil deGrasse Tyson's lecture, "Cosmic Perspective," which was offered as part of the Elmhurst College Roland Quest Lecture Series.

And I even wore my blue galaxy scarf. (Hey, don't judge) 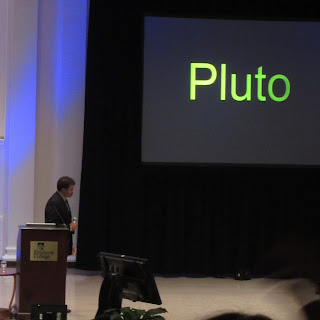 It was great! His presentation was funny, enlightening, and passionate. One of the highlights of the evening was when he discussed the demotion of Pluto. Neil (well, we are on a first name basis - in my fantasy life, that is) discussed the reasoning behind the decision to remove Pluto's planet status. After a lengthy discussion, he said, "Pluto had it coming."

He asked if there were people in the audience who were still upset about the whole Pluto issue. Several folks raised their hands (including my hubby). He then walked over to his computer and clicked to this:

During the lecture and the Q & A that followed, he touched on topics ranging from the inarguable genius of Newton (and if you do try to argue with him, he'll tell you to "shut up forever"), killer asteroids, science education, the Higgs boson particle (explaining it with a Hollywood party analogy) and his views on the existence of God. See..... nerd heaven!

And now that I have confirmed my nerdiness, I'm going to go read The Space Chronicles. (Yes, I bought it at the lecture.)
Posted by Anita Vaughan at 11:31 AM