When I met Shannon & Steve for our initial consultation, we hit it off immediately. By the end of our conversation, I knew I just had to be their Celebrant! We talked about their wedding - and just about everything else, ranging from comic books, Harry Potter, to pet cats.

Their ceremony included many personal elements, including a handfasting. I also shares they story of Steve's proposal. He surprised Shannon with a Beluga Encounter at the Shedd Aquarium, which was something she had always wanted. What she didn't expect was that one of the belugas would play an important role in presenting the ring.

All along the wedding planning process, I knew Steve wanted to add a secret element to the ceremony. This wound up being a helium shark (as a whale stand-in) to deliver the rings. And naturally, the shark's entrance was accompanied by the Jaws theme song, thanks to the always fantastic DJ Harsh.

In a addition to this fun surprise, the ceremony also included quotes from The Princess Bride, Harry Potter, and author Neil Gaiman. Can you tell why they became one of my favorite couples?!

Their gorgeous wedding, which took place at the lovely Hotel Arista in Naperville, is featured on the Angel Eyes Photography blog. Click HERE to check out the amazing pictures! 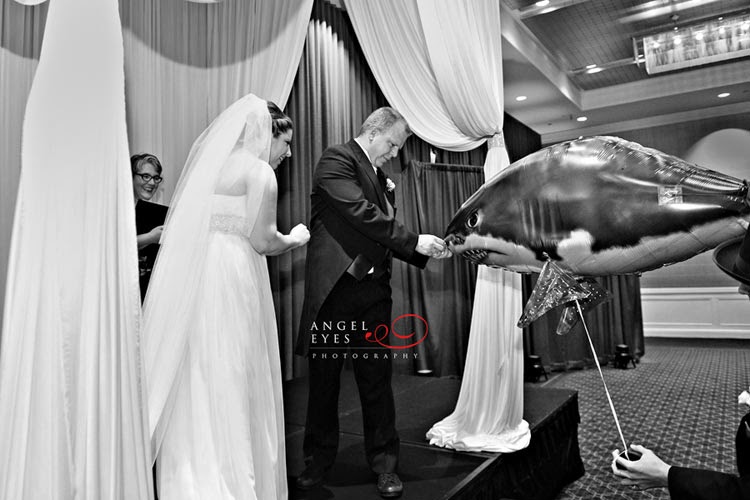 Posted by Anita Vaughan at 6:45 AM