The Julies Get Married! 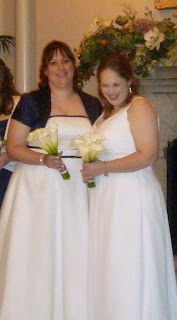 Last weekend, I had the pleasure of officiating the ceremony of Jule G. and Julie S. at Casa Royale in Des Plaines. But, to keep track of who we were talking about, they were known as Julie and Julene for the ceremony.

I've lived in Des Plaines for over 10 years, and I'm probably the only person in town who hasn't been to Casa Royale. I was always curious as to what it looked like inside, and I have to say that it was lovely. But, by far, the best part of it was the fantastic staff. From Lynn, the friendly and helpful wedding coordinator, to the wait staff who made sure everyone was taken care of, the service was really fantastic!

As for Julie & Julene's wedding, the ceremony began with them each being escorted down the aisle - Julie by her parents and Julene by her son. The bridal party followed, which included Julene's daughters. All three participated in the handfasting later in the ceremony.

Julene and Julie's story was sweet and romantic, reflecting how deeply in love they are, and the strong bond they share.

They exchanged vows under the Chuppuh, which I explained as follows:

Julie and Julene are exchanging vows under this wedding canopy, known as a Chuppah in the Jewish tradition. The Chuppah represents shelter - the home the couple will build together, as well as the home each has built in their hearts for their beloved. 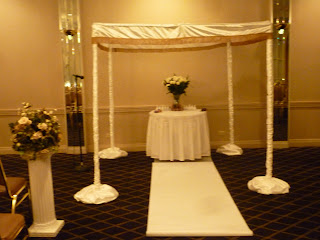 As you’ll notice, the sides are open, just as their home and arms will remain open to you, their family and friends.

The four poles correspond with the four directions - north, south, east and west - just as their love reaches to the four corners of the world.

At the end of the ceremony, we had planned for the traditional breaking of the glass. The only problem was that the glass that Julene had to step on was virtually unbreakable! She tried several times, and then Julie took a turn. Even Julene's son got in the act, but to no avail. After much laughter, Julene tried again, and the glass broke. Whew!

Julie and Julene, I really enjoyed being a part of your special day. After the struggles with that glass, the rest of your days should be smooth sailing!

I wish you and your family a lifetime of happiness and love!

Posted by Anita Vaughan at 7:29 AM